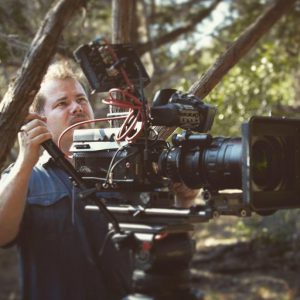 I directed my first feature film (which was downright awful) in 1995 when I was 22 years old. We shot it on Eclair NPR and ACL 16mm cameras and recorded the audio on DAT. I cut the entire feature on a flatbed 6 plate moviola 16mm edit bed. I wasn’t happy with the edit so I got my hands on an Avid Xpress SDI Deluxe and re-edited the entire film. We had 144GB of storage which at the time was unheard of. It was my first taste of digital video editing. After my first feature I focused on Steadicam work and over the years I transitioned into becoming a director of photography which is where I currently fit in most of the productions I work on.

“Apocrita: A Bee Film” came about from a re-hashed idea of a film I did a few years ago called “Apis Mellifera: Honey Bee”. Apis Mellifera was a film made for kids to teach them simple bee facts and why we should save the bee. The film did really well and went viral with Huffington Post, Gizmodo, Engadget and others running it on various media outlets including television. It also has been featured in numerous museums and used as an educational tool in numerous schools worldwide. That said the film was really intended for kids so I wanted to make something a little more artsy and for adults. That’s where Apocrita came from, which I think is a refined version of the film.

I had seen a lot of posts about FilmConvert on Twitter several years ago and downloaded a trial of it. I loved it and knew that it wasn’t simply a tool to add film like grain but also to be able to craft and refine the look of project without having to have a lot of grading experience or time. I wanted to use FilmConvert on this film because I love a lot of of the Fuji Film stocks that FilmConvert offers and I was able to jump through all the stocks quickly to get a base start point to grade.

For this film I wanted a ominous green background with a lot of bokeh. I wanted in camera vignetting with a lot of tight extreme macro shots to bring the viewer as close to the bees and wasps as possible.

My goto for this project was FJ Velv 100 as I felt it was pretty accurate to the actual film stocks I had used in the late 90s and early 2000s with my Movicam Compact and BL4S. I did not use a camera profile as I kept this in FCPX but I did tweak everything. I started with FJ Velv 100, dropped the film grain to zero, lowered the film color a bit and adjusted the curve to enhance what I got in camera. I had a custom log file installed on the high-speed camera that I pre-tested with these film convert settings, so I knew as long as I was white balanced and exposed properly I would get exactly what I had on my look sheet.