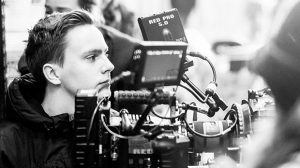 I’m a 20-year-old cinematographer and camera department freelancer from Northern Europe. I grew up in Helsinki, Finland where I went to school to study motion pictures. I got to work in a features and short films as a camera operator and went to shoot commercials and music videos for a time.

I was asked to do a commercial film for a company called ‘Moment’, I pitched an idea to push the boundaries of mobile filmmaking with a atmospheric film that was shot in low light at night. This is the idea that I came up when walking my hometown’s street.

‘Fluorescent Nights’ is a film about street musicians that meet each other by chance in the streets of urban city. They decide to team up and leap into the dark to chase their dreams of a better tomorrow. It’s a rocky road towards success and fame, illuminated only by the fluorescent lights and their own company. No one knows what the future holds, but when you truly live in the moment and enjoy the adventure to the fullest, only the sky is the limit.

I know the iPhone image quality is not the best, especially in low light environment. That’s why you don’t see that too often. I wanted to challenge myself and the equipment and shoot at night in total darkness.

I made some test before the shoot and found out that by underexposing the image, you also get rid of the noise and can’t see the quality that well. All though you still need a lot of light to see something. But for me it was great, because I could really control what I want to show and what is important in the scene. So I could light the scene and create the image I want, instead of pointing my phone in one direction in pure daylight.

There’s the old photography trick, which is when you have at least one bright light source in the frame, your eye tricks you to think the image is exposed correctly, when actually it’s nowhere near.

This is very colorful piece and we have a either ordinary fluorescent lights or neon lights in almost every shot. We shot it in real locations but tried to keep the angles different and create a visually unique world out of it.

I used the Apple iPhone camera profile with a KD 5213 Vis3 film stock. I used a little bit of the film curve and adjusted the overall temperature of certain shots with a Film Convert. It made a great difference getting the iPhone footage look good.