My name is Abel Robinson. I currently work as a Producer and Director in the commercial advertising space in Sydney, Australia and have been doing so for the past 3 years. However, I have always had a soft spot for creating narrative films. Just like many other filmmakers, my journey began as a teenager with a family camcorder, a very loose script, multiple hats to wear and a whole lot of ‘let’s figure it out as we go”.

Growing up as a kid I used to live in an apartment block right above a DVD rental store. So you could assume I spent a lot of time hanging out with the store clerk who gave me great film recommendations. From which I will always say that Jurassic Park made me fall in love with movies and Inception made me realise that I wanted to make movies.

I run a horror brand called Axmo Deus with 3 other colleagues of mine; Noel Vinson, Gordon Fletcher and Luke Agius. We release 1-Minute horror films on the first of every month on all of our socials. These range from paranormal horror, gore and every bloodcurdling thing in between.

Suture was our latest episode directed by Noel Vinson which depicts the angst many retail workers face when dealing with a Karen. Using a unique spin on the voodoo doll concept, we asked ourselves what would happen if a retail worker could finally exact her revenge on an obnoxious customer?

This project, unlike our previous editions, was actually quite challenging for numerous reasons. Keeping in mind we make 1-Minute films. Condensing a whole narrative within that time frame, and with the right pacing and tension, always presents problems. It usually comes down to cutting shots that may look great in order to accommodate ones that better serve the story. However, considering Suture is our tenth episode, we now have a better feel of what exactly can be pulled off within that limited time frame.

Another hurdle we faced occurred just as we were wrapping up principal photography. Sydney was placed into a tight Covid lockdown which restricted us from coming into the office. This meant extra delays between liaising sound, colour and VFX, as they were all done remotely.

FilmConvert has always been on my radar, as many of my friends who are professional colourists use the application. They have spoken highly of FilmConvert because of its ability to do such detailed refinements to the grade. Hearing that, I just had to give it a go.

I genuinely love the forgiving and soft nature of real film, which is lost nowadays given the digital landscape of cameras. For years, I had been using video overlays to emulate film stocks in my grades so once I got my hands on FilmConvert, it was a literal Godsend.

To be completely honest, I use FilmConvert in every narrative project I work on. This is primarily because I always desire a film aesthetic to the style of the colour palette that I am trying to achieve. FilmConvert has actually become an intuitive part of my workflow, as I have created a template node tree that I import on every project whilst grading.

From the very beginning, Suture was always aimed to bring a Giallo style of colour palette to the forefront. Being massive fans of 70s and 80s horror, Noel and myself wanted to give Dario Argento a nod on this particular film, because it honestly just called for it. As such, we hearkened back to that colour and vibrancy. This was made easier in the grade as our cinematographer, Rayan Heloui, did a phenomenal job lighting the scenes to achieve that very stylised aesthetic.

My workflow is quite simple because I feel that a grade can only be as good as a well-lit Shot. For Suture we filmed on a Panasonic S1H in 10bit, 4:2:2 Vlog with Sigma Art lenses. And Davinci Resolve has always been a powerhouse of a grading program so that is my go to. 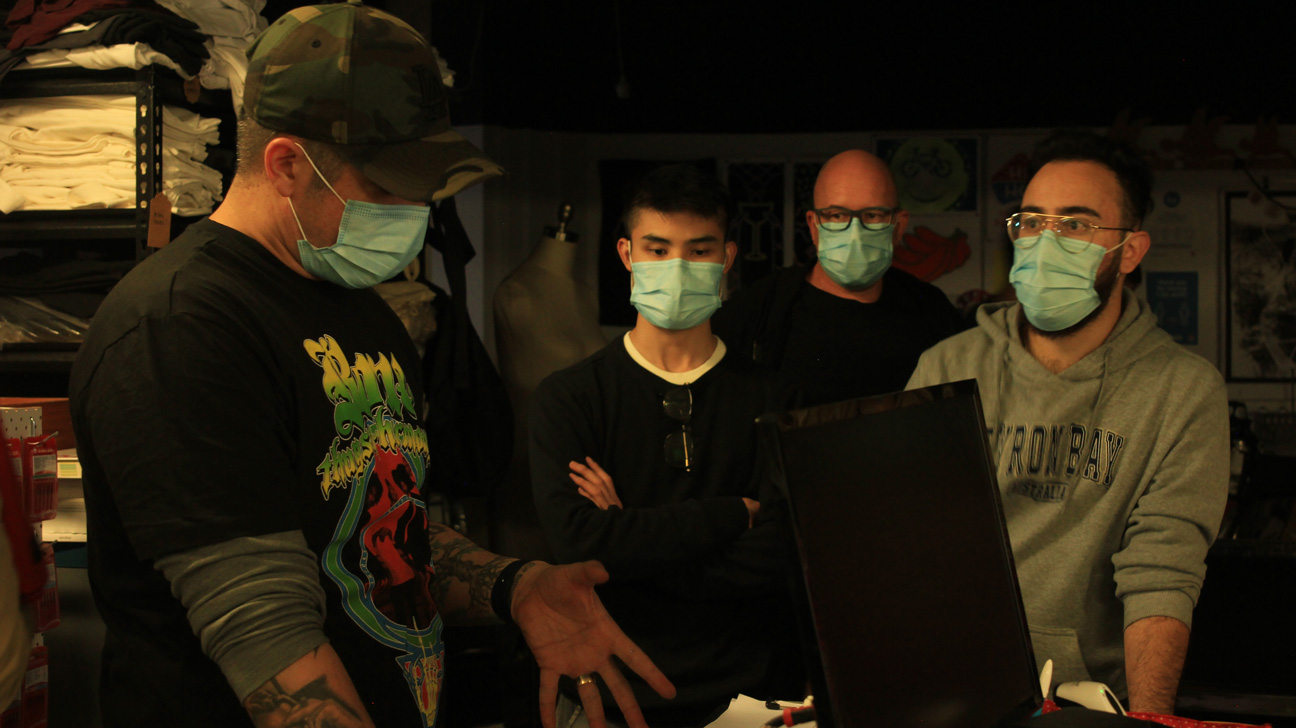 I start my grades with a primary balancing node to make adjustments and corrections to help get the footage uniform across the board. Now, for the next sequential node, I add FilmConvert and select my camera profile and film stock. For Suture I went with 35mm Full Frame, KD 5207 V3 for all the sequences that took place within the shop. 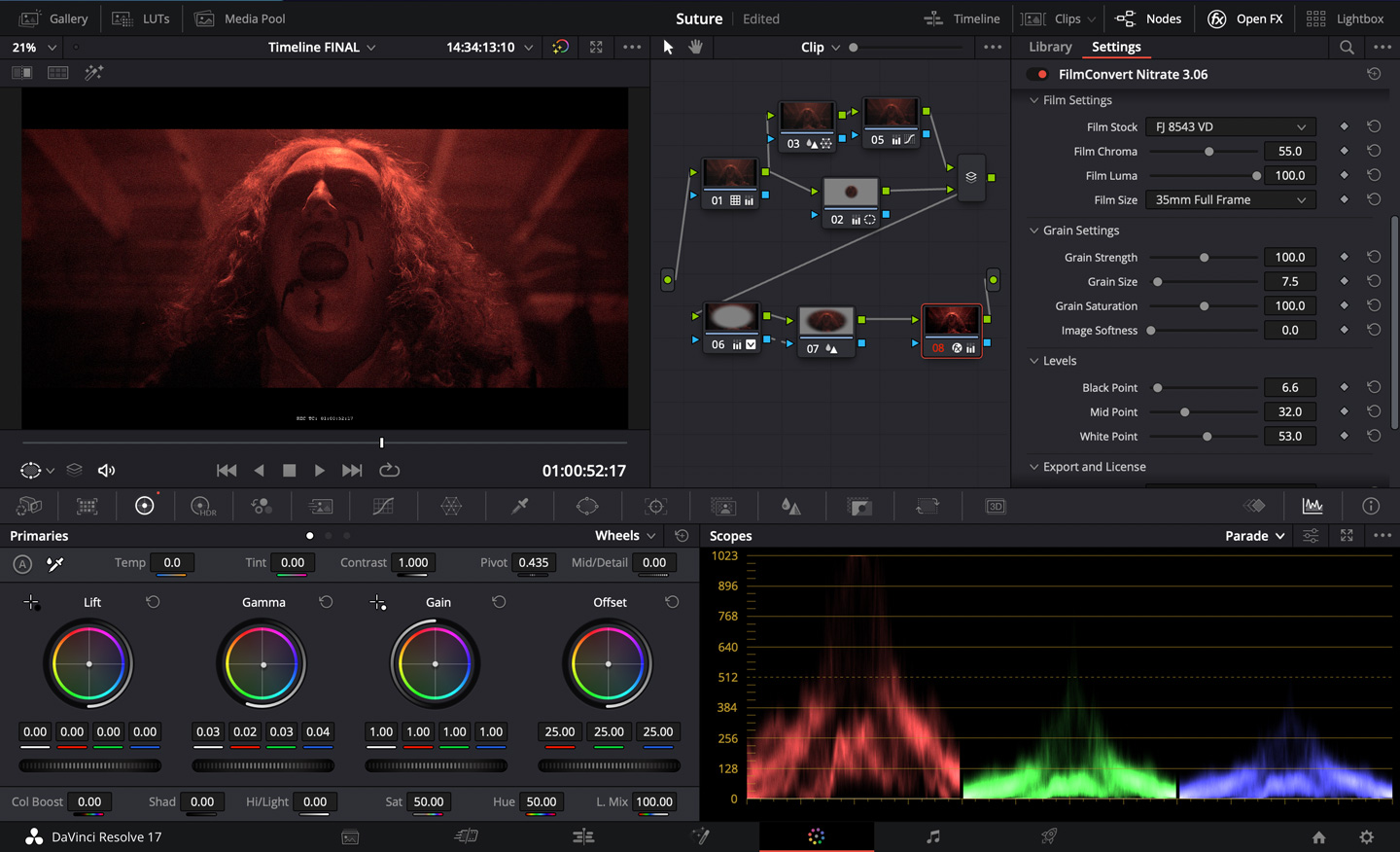 However, for the voodoo sequence, I went with 35mm Full Frame FJ 8543 VD. This was the first time I graded with two different stocks because I wanted to create a visual distinction between the shots, as they narratively took place in separate locations. This was also to create that stylised Giallo aesthetic between the sequences.

Once I have locked in my stock, I balance out the contrast and brightness. Next, I’ll work on the colour. Using colour wheels and masking sections of the footage, I’ll start to hone in on the desired aesthetic. This part of the process is usually a whole lot of trial and error between what colour palette I want and how far the footage allows itself to be pushed. Once I land on a visual style, I jump back into FilmConvert Nitrate and adjust grain levels with the curves function.

The only other effects we used on the film was for the final shot. That was completely done in After Effects. The effect, itself, was quite simple, but the process was tedious! It required numerous plate grabs which had to be masked together. Another thing I really love about Film Convert is that it’s also fantastic during the composting stage of VFX elements. It really helps marry them to the original footage seamlessly, making the final shot one cohesive piece.

Thanks for checking out our film! Here are links to our other work and socials: