Jonah Diaz is a 19 year old filmmaker, based outside of Austin, Texas. Earlier this month, Jonah released his short film Billboards, a coming of age story that deals with love, and subsequent heartbreak. FilmConvert caught up with Jonah, to discuss his filmmaking journey.

FC: Hi Jonah! Great to see you, can you tell us a little bit about yourself ?

Jonah Diaz: My name is Jonah Diaz, I’m 19, and I live outside of the Austin, Texas area.

Oh good, and so you’re a young filmmaker, how did you get into filmmaking?

My dad is actually a filmmaker, and he’s the one that got me into it really. A couple of years ago in my sophomore year of high school, we went to go see Mid-90’s at the Alamo Drafthouse. Years before that, he would always say “when you start making films” and I would say “I’m never making films, I don’t know why you keep saying that!”. Then we saw Mid 90’s and I was like “okay, I wan’t to make a film now”. So, it’s been a little bit of time, but that was my main spark to start making films.

That’s really cool! How did you learn everything to make films? Was it through your dad or did you do further research?

It was a little bit of both. My dad is here and he’s the best teacher I could have. So it was a lot of hands on stuff and watching him too. I would take my camera to school and record my friends to make little montage videos. That’s where I got most of the help that I needed, but also videos like Film Riot were a great help. My Dad and I would watch it and go through it.

That’s so good, and are you working within the film industry now or are you still studying?

I’m still studying, I don’t have a film job or anything and whatever my Dad does I’ll go with him, but I’m not doing anything right now.

So you have your first short film out now Billboards which is exciting, how did that come about?

Okay, so Billboards is a true story for the most part, it was a real breakup that I had and that I had to deal with. All the dates in the movie are a bit confusing but they’re real times, and I didn’t expect anyone to understand them except for that other person. It was November to January, and it was a really good time and I was enjoying myself. Then you know, things happen. You saw what Mia did, she left him on his birthday and that’s what happened. It was really terrible and then February came around, and we had a horrible winter storm in Texas. So we were all frozen shut, and to top it off, I was blocked, so I had no communication and no power and I was struggling. Then March came, and I got Covid. It was a horrible three month period, but during one of my fever dream Covid nights, I thought “I need to write a script. I need to do something”. I think from 1am to 3am I was just writing, and I wasn’t going to stop until he sees something that I can present to him that has a beginning, middle, and end. That’s what happened, and I wrote Billboards. It was a big fever dream written in one night, and that’s how it came to be.

How long did the actual filmmaking process take?

It was only supposed to take about three or four days, but in May we had a month of just pure rain, and we couldn’t do the golden hour that I wanted in the bridge shot. So it took, I would say, two months with just waiting and lallygagging because of the weather.

That’s annoying, but at the same time it’s kind of a good thing, because you have so much time to refine your script and reevaluate what you want to do that’s right for the film.

Mm-hmm, that’s pretty much what I did.

And so what equipment did you use to shoot on? It looks beautiful.

We shot it on the Black Magic Pocket 6K, with a Sigma 18-35mm and Rokinon Cine DSX. Obviously we used FilmConvert, but that was pretty much it for our setup.

That’s a pretty good setup! How did you find out about FilmConvert?

I found out obviously again through my Dad, because he found out through Film Riot. He watched that and he made a Western movie that did with FilmConvert. He told me about it and said “look, I have this thing that helps you make nice films”, and so I tried it out. Once I saw it in golden hour I was like “okay, it’s too perfect”.

A lot of the colours in the film are very golden-y and very nice, it brings you into the story. Was there a particular look or style that you wanted to go for while you were shooting?

Yeah so I took some inspiration from the show Outerbanks. It’s very golden and I like that, since my favourite time of day is golden hour. A lot of Wes Anderson, especially with the skateboard scene and the lines, I wanted it to be appealing to the eyes. For the most part, I wanted to have the indie film look, sort of around that vibe and I think I was able to capture that.

That’s awesome. How was the whole post-production process in general for you as well?

It wasn’t too bad. I did all the editing and colouring myself, so whatever  I wanted I would get since it was my vision. I would just edit in DaVinci Resolve, throw on FilmConvert and a LUT and I was good to go. 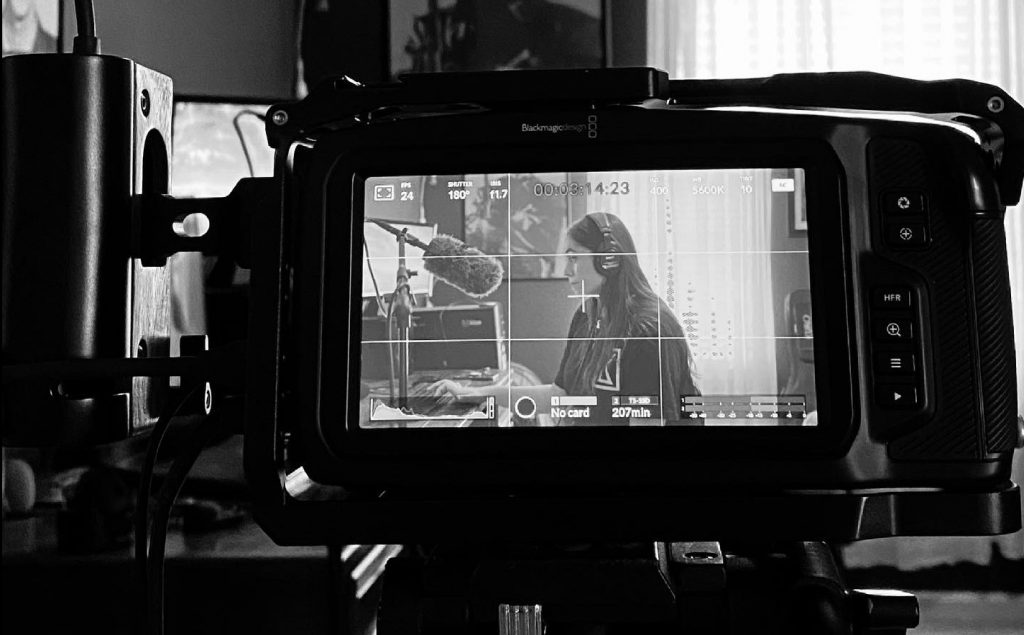 Nice! I was just going to ask if there were any certain camera profiles or tweaking that you had to do. What were your favourite settings using FilmConvert?

In Black Magic I put it on Rec. 709, and then I found a LUT called Mahogany but I don’t know where it was from, and then I put on FilmConvert. I didn’t choose a regular film stock, I put on the Kodak Portra 400 one. It was my favourite one and I really like how the colours turned out.

It’s really cool eh, because it’s amazing how all these different filters and film stocks tell a different version of the story. You wouldn’t normally think about it because it’s all just colours you know. SO why do you think that colour grading is such an important step when making a film?

I feel like it’s really just the overall vibe of the story. Billboards is really golden and warm, it’s a coming of age moment that’s really happy, but sad at the same time. If I used another colour profile that would’ve been really cool, I feel like the story would’ve been more sad in summer and I didn’t want that; since it’s a moment of growth, I wanted to show the happiness and warmth of it.

Absolutely. You’re only 19 and already producing great short films, do you have any more projects lined up in the future?

In the future yeah I would hope to. Currently I’m fresh out of ideas since i put them all into Billboards, so I’m still in the process of coming up with another story. I would definitely try and do another one by the end of the summer I hope.

For sure, is there any sort of advice that you would want to give to any young people that may think “I’m too young to be a filmmaker” or anything like that?

I would just say that if you have a vision then go for it. There’s really nothing holding anyone back ever especially with our phones. I’m blessed to have the gear that I have, but if you want to make something and have a vision then just go for it. You’re only going to regret not doing it.

Absolutely, good advice. Where can people keep up with you on social media and follow your work?