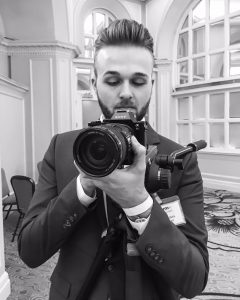 Give us a bit of detail about yourself – background, profession, how you got into filmmaking and your current role?

I grew up in Southend-On-Sea, UK, surrounded by my father’s video cameras, and found an early fascination with capturing a moment and experiencing it again at home. Obsessed with watching the ‘rushes’ of my childhood home movies as they were shot.

That passion fed into my early teens as I got my own camcorder and began cutting family holiday footage into features and realised my love for editing.

Starting with the Adobe Premiere package as a 13 year old put me in good stead for a wealth of plugins to enhance my personal projects, and saw me through studying filmmaking at school and college, before completing my degree in Editing at Ravensbourne University, London.

I was told to download a trial of FilmConvert by Tom Paton, I’d been assisting on a shoot with the director when I asked how he got such great grades on his music videos and projects. That was 2 years ago and it’s been my go-to colour grader as well as corrector ever since.

I used FilmConvert for my Chakra Tattoo Lounge promo as the look we’d discussed needed to be subtle but cinematic too. It needed to be perfectly balanced between shots and I knew that FilmConvert was the most natural choice for a clean organic finish. I also knew that if I needed to adjust the exposure of any of the shots, FilmConvert would’ve executed it without generating noise or artefacts on the outcome. Something I’ve found troublesome with other grading software.

The style was to go for the slightly faded contrast organic film look, the plan was to use some film transition effects throughout so the two went hand in hand. We also wanted to keep the whites and blacks generally unbiased and realistic whilst giving a warm feel to the slightly clinically white tattoo parlour lighting.

I shot the promo using my Sony A6300 which is usually my B Camera, but we’d discussed getting as close as possible with the detail of the tattooing, so I shot the whole day in 4K S-Log. Whenever I shoot S-Log I end up using FilmConvert to master bringing the contrast and saturation back, in this case I used KD 5207 Vis3 as the base stock before removing grain and adjusting the curve percentage to 70% for softer contrast.

Aside from FilmConvert I used Adobe’s Lumetri colour panel to highlight some colours such as the red inks used. Separate to the grade I also used some rotoscoping to generate some natural transitions between shots such as the tattooist’s hand wiping across the screen to reveal the next scene.