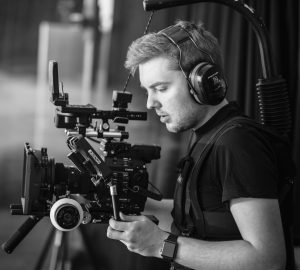 I’ve wanted to be a filmmaker since being inspired by The Empire Strikes Back when I was 5 years old. I spent my childhood watching films and went on to study Film Studies at The University of East Anglia in the UK.

I graduated in 2010, bought a second hand Sony EX1 and went freelance, shooting TV and corporate video. I quickly realised that in order to have the kind of creative control over projects I desired and to make the kind of films I wanted, I’d need to have a production company, so a few months after going freelance I decided to setup my own production company, Forward.

Having made my own films since I was 16 and wanting creative control over all aspects of production, in the early days I’d direct, shoot, edit and grade everything. I always strived to create a filmic image that matched my aspirations and inspirations.

Over the years I’ve grown the company and we’ve been lucky to create films I’m incredibly proud of for clients around the world. These days I still have a hand in all aspects of production, but concentrate on directing and shooting, as well as colour grading. I’m passionate about creating films with striking, filmic visuals which is why FilmConvert is always a vital tool in our colour grading toolbox.

Wex Photographic approached us last July with what seemed like a dream brief; tell the inspirational stories of three incredible photographers, and explore what the power of photography means to them. Matt did an incredible job of finding our three subjects and guiding our creative thinking, and after that we were left to interpret the brief and create the three short films.

I originally found out about FilmConvert back in 2013. I’d just started shooting on my Canon C100 and as I recall Philip Bloom did a good review on it. I downloaded a trial and started testing it on a series of commercials we were making at the time for an International School and was hugely impressed with how great it made the footage look with very little tweaking, and then also how it could be used as part of a colour grading workflow to create even better results. It’s been part of my post production pipeline ever since.

FilmConvert is a tool I use on almost every project we create to varying degrees. We knew we wanted the films to have a very filmic, cinematic colour palette, with a slightly low contrast feel and to look and feel like the high end pieces of content they are.

My personal interest is the intersection between documentary and high end commercial/narrative content. My aim was to tell real stories in as truthful a way as possible, but shoot and present them in a more stylised, cinematic way than standard documentary. I also wanted to add some film grain to add some texture to the image. We were also on a tight deadline to turn the films around in, so FilmConvert, along with some other tools was a natural choice.

On these films, we used FilmConvert as the final node of the grade in DaVinci Resolve. I used a custom LUT as the basis of the colour grade, used several nodes to tweak various aspects of the image, before using FilmConvert as the final step. We used the C300 MKII camera profile, with Kodak 5207 Vision 3 film stock. We set the grain to Super 35, and ran it about 30%. The film colour was set to between 10% and 15% as we were using it as a final polish layer on the image. Given the documentary nature of these shoots we also used Resolve’s extensive capabilities to ensure the images looked as polished as possible, for example tracking masks to correct exposure on parts of the image.