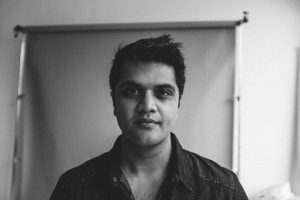 I’m a writer/director based out of New York, but originally from New Zealand, and Fiji before that. I studied filmmaking both in New Zealand (Victoria University) and the US (UC Irvine). I guess my intro into filmmaking was like every screen gazing child who loved movies: the realization that somebody made that. As far as music videos go, I watched Michael Jackson’s Moonwalker movie way too many times.

My site and reel can be seen at www.shahirdaud.com. I have a very cool project with Nigel Stanford coming out shortly involving practical robotics making music (www.nigelstanford.com)

I’d worked with DP Brandon Ripley (www.brandonripley.com) previously and he’d just come off directing a video for artist PYRMDS which was pretty great (https://vimeo.com/215410161). PYRMDS had a new track and Brandon thought I’d be a good fit.

I definitely flipped out for the track when I heard it because not only was it really catchy, it was also incredibly cinematic.

Brandon, PYRMDS and I brainstormed some ideas together, but we were always put in check by the available budget which wouldn’t allow us to shoot more than one day and probably not more than one location.

We knew we wanted to do something in slow motion because of the chorus line, but weren’t exactly sure what that was. Our original plans to shoot something on the Phantom also fell apart because of the budget couldn’t stretch far enough to faithfully light a hi-speed shoot.

I also had some grand ideas about using Holi powder in an artful way. Holi powder has been used a lot in music videos, but I wanted to give it some purpose for this song. I originally wrote a video with three different stories which each ended with a Holi powder explosion. Unfortunately, the budget again proved too tight to shoot all three, so we narrowed it down to this one underground fighting scenario. Aside from being an incredibly talented singer/songwriter, PYRMDS (www.jackthegiantinc.com http://www.jackthegiantinc.com) is also a pretty experienced fighter so it felt like the most natural fit.

Finally, I spent a little bit of time talking to PYRMDS about what he was thinking when he wrote the song. When he mentioned that it was really about the fear he felt about continuing to be an artist after becoming a father, the whole concept clicked into place for me. I had recently become a dad, and the fear of not being able to continue filmmaking really hung over me.

I should note that we didn’t want the video to be absolutely prescriptive in terms of meaning. The song could be different things to different people, and the fatherhood angle is pretty open.

Again, we originally wanted to make something very glossy and precisely lit, but when push came to shove, I had written a scenario that everyone seemed to respond to, so it was important to forgo our aesthetic expectations and instead focus on telling the story.

As a result, we shot on the available camera instead of renting something. Luckily for us, Brandon owns a RED Epic, which is obviously no slouch from an image processing point of view. Still, we were stretched with our lighting budget, and the location was large and open to natural light. This meant that Brandon had a real uphill battle trying to light consistently with an overall look. Luckily for me, Brandon’s a genius and incredibly easy to work with!

After we factored in every element of the video together (the location, the story, the VFX, the fight choreography, camera blocking and grip selection), it started to feel very gritty and grungy. This was 180 degrees from what we started with, but it worked for what we were doing. So we just went with it and decided we were making something a little more organic, which included shooting with vintage anamorphic lenses.

This look filtered down into the grade which has soft open shadows and full highlights. FilmConvert also helped us even out our grain structure which fluctuated quite a bit on set.

In post, I’ll often apply a FilmConvert look (Usually KD 5207 Vis 3) just to see everything in a single style. It helps with editing just to see how things might eventually land to evaluate a shot selection. Sometimes a shot I don’t think is going to work in the edit will end up making it in because we’ve applied a look and can see how it will all fit together. I then pass that look onto our colorist (Carlos Flores – http://www.carlosfloresfilms.com/) who sometimes will apply that look as a baseline or pull our source footage in that direction.

The most important thing is figuring out the grain. I’m very conscious that we want something that looks noticeably grainy, but doesn’t get lost in the different compression stages. Taika Waititi recently posted a shot of his edit monitor for Thor:Ragnarok which has hands around it so it looks like a cellphone. It’s a little sad, but I’m under no illusions that most people will watch this video on a cellphone and won’t be absorbing all the minor tweaks and details that we all agonize over.  That said, even if people aren’t noticing the little details, we still need to consider every pixel. My job is to create an entirely artificial reality, and the less you can see the seams the more people can be fully absorbed in the moments we want them to experience.

There’s a lot of minor effects in this video. Because I have a background in VFX, I know how I can save a shot in subtle ways. For example, there’s an overhead shot where PYRMDS is laid out on the ground. The other fighter walks past him. In reality, that didn’t happen, and this is two handheld shots stitched together, which is something I knew I could do in post rather than try to get the timing exactly right on set.

The fun part is obviously the end with all the Holi powder. For the most part, this is all real and achieved practically on set (Nick Poyner from Feast Effects). We knew we wanted to pump colors and tweak hues in all sorts of weird directions, but unfortunately, the RED negative was already pushed really far because of our limited lighting. Luckily the decision to make it a grainy, grungy video let us get away with a lot when tweaking these colors.

What new features would you like to see in future versions of FilmConvert?

To be honest, there’s not a lot I’d tweak in terms of FilmConvert. The main reason I use it is because it gives me a quick way to give my footage a look while editing. During the early stages of an edit, I’m usually pretty indecisive about what I ultimately want, so I need to be able to evaluate footage quickly and FilmConvert allows me to conform everything with an overall style so I can put shots into context. I don’t want to really tweak too much until we get into the color session.